I thought I really know HTML. I thought I know it so well that I could write HTML in my dream – come on, you call HTML codes?

But recently I realized how naive I am, cause one of my friends asked me to build an infinite load feature, so when user scrolls down something to a certain point, the app should automatically load more content.

And I had no ideas about how could I determine that user is going to reach the “end” of some lists, but after some Googling I stumble upon some DOM properties, which are scrollheight, scrollTop and clientHeight.

When does HTML DOM has those properties?! And how come I have never heard of them before?

Ok, never mind, let me check them out.

To better illustrate the idea, I draw two boxes, where the bigger box is the full content at full height, and the smaller box is the visible area. 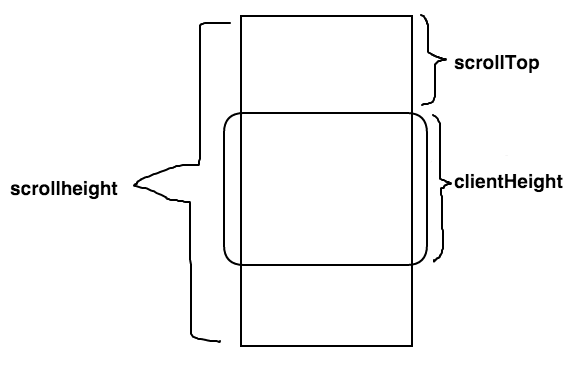 Okay, talking is cheap so I also made a small JSFiddle to further demonstrate the idea in codes. Try scrolling the orange box and watch those numbers change.

So now I could just monitor the how far user is from the “bottom” of the scrollable area (distance, which equals scrollheight - scrollTop - clientHeight), and trigger the load more AJAX request when distance reaches certain limit, say 300 pixels or something like that.

Hope you had fun reading and now know exactly what are scrollheight, scrollTop and clientHeight!

For more details, check out